Kampuchea News aggregates Cambodian news from more than 30 local and international news sources. On an average day it collects about 100 stories in English and more than 600 in Khmer.

Stories in English are categorized by province and news section, such as business, politics, crime, weird, etc.

Top News is a human-curated section of the day’s most important stories.

Kampuchea News is largely a personal project that allows me to explore new topics like AI and machine learning and revisit familiar ones like speed optimisation, javascript and PHP.

Hence the term beta. There’s an ever-growing roadmap (and bug list), with better support for Khmer, story clustering and more. But as with all personal projects, sometimes work gets in the way 🙁

Check it out at Kampuchea News. And let me know what you think. Everyone hates spam. So why are more and more local companies adopting this awful marketing technique? Ignorance, I suppose. But there are ways to fight back.

During a recent project, I stumbled across a dead-handy WordPress plugin that does exactly what its name suggests — obfuscates your email address.

For more on the subject, check out A List Apart’s essay on Graceful Obfuscation.

Idle computer hands now have a place to play.

HackerspaceÂ Phnom Penh will officially open in January 2011, giving the Phnom Penh IT community a common space to converge.

Hackerspace philosophy promotes the idea of knowledge sharing in an open, decentralized society. Dozens of Hackerspace groups exists worldwide. Collectively, the goal of the spaces is to provide “a location where people with common interests, usually in computers, technology, or digital or electronic art can meet, socialise and/or collaborate,” according to the Hackerspace entry on Wikipedia.

“[W]e decided the best way to raise the capital is internally from future members and supporters of Hackerspace Phnom Penh, rather from private companies or organisations,” the founders wrote on the group’s Wiki. “This will ensure the independence of the Hackerspace which everyone at the first meeting thought was very important.”

I am trying to get a WordPress Meetup going. If you are WordPress user, or would like to learn more about WordPress with a group of like-minded people, please join the community. Sign-up details after the jump.

END_OF_DOCUMENT_TOKEN_TO_BE_REPLACED

The capo says Preah Vihear will reopen after New Year.

The Preah Vihear ruins on the Thai-Cambodian border will be opened after the New Year and Thailand should also open its side of the border so people can visit the ancient temple, Cambodian Prime Minister Hun Sen told visiting Thai army chief Gen Prayuth Chan-ocha in Phom Penh on Tuesday.

… “Since we are neighbours and cannot move away from each other, we should cooperate and stay together in peace.

“Thailand and Cambodia are like a tongue and teeth which must be in contact. Â It is not right that the teeth must be removed if the tongue is bitten,” the Cambodian prime minister said to Gen Prayuth.

The man certainly has a way with words. 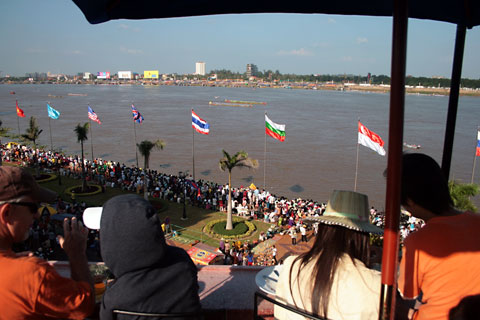 Day Two of The Water Festival, aka Bon Om Tuk, as seen from The FCC Cambodia. City officials expected about 4 million people, or more than a quarter of the Kingdom’s population, to arrive from the provinces. Down on the riverfront on Sunday afternoon, it didn’t feel like nearly that many. In fact, the crowds seemed thin. But maybe the midday heat kept wiser people indoors.